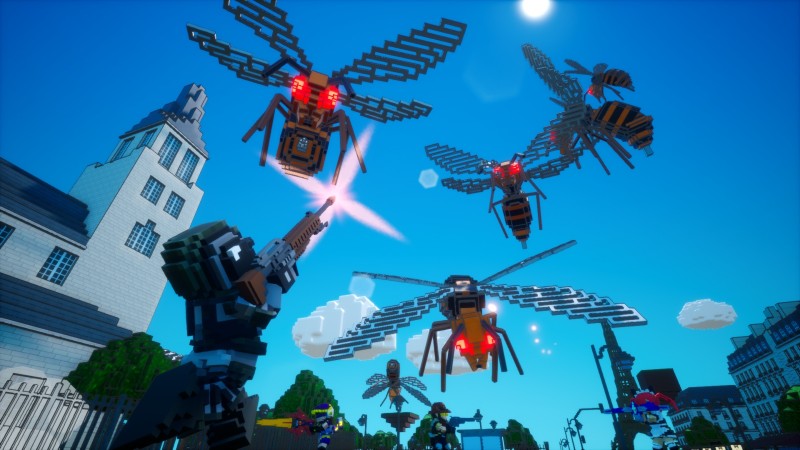 Remember when two Earth Defense Force games were announced last June? One of them was World Brothers, a more cartoony take on what’s already an absurd, over-the-top franchise. Developer Yuke’s and D3 Publisher has dropped a new trailer revealing the summer release date and showcases more of the game’s blockier take on bug-slaying.

World Brother’s launches May 27 and is now coming to PC in addition to PS4 and Switch. The game is still all about blasting giant bugs as well as robots and aliens, but that action is rendered in more lighthearted voxel graphics. Personally, I think the look works for the series, and it’s especially nice if you’re sensitive to looking at giant, realistic bugs (including spiders). Take a look at the new release date trailer below to see if you agree.

Players assemble a team of four EDF members to take on these gigantic threats. Team members come in various classes with different abilities. These include the returning Soldier classes such as Pail Wings, Fencers, and Air Raiders. You can also recruit over 100 local EDF members, dubbed “Brothers & Sisters”, to your cause. Gathering as many different types of units is key as you’ll want to be able to mix and match the best combinations to take on your gargantuan foes. Speaking of whom, World Brothers features an invasion by foes from EDF’s past, including Invaders, Foreigners, Primers, Lavegers, and Aggressors.

Players can go it alone or work together with friends in four-player online co-op and two-player local split screen (on PS4 only). Unfortunately, World Brothers does not support cross-play.

To see more of World Brothers in action, you watch its debut trailer here. Meanwhile, the next proper EDF game in the works, Earth Defense Force 6, is scheduled to launch this year but hasn’t made a peep in some time.

So EDF fans, what’s your take on World Brother’s unique approach to the series? Let us know in the comments!