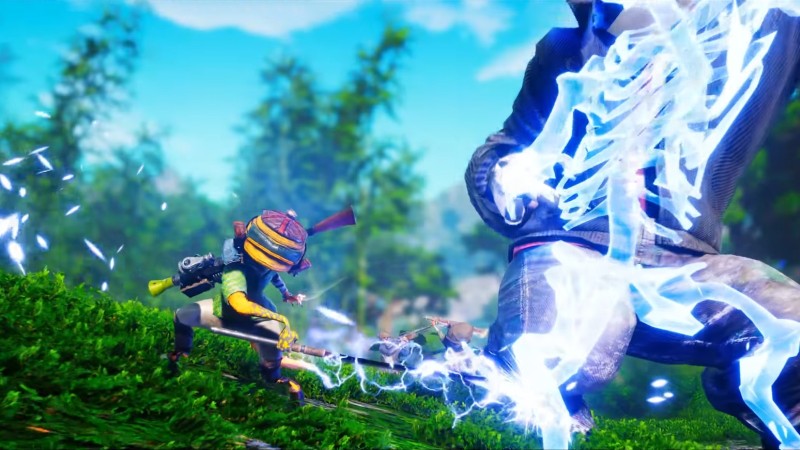 Biomutant has been a long time coming, and has us salivating in anticipation every time we see it. The latest look at the ambitious game focuses on combat, showing off some of the fancy fisticuffs your gene-spliced character will engage in as well as revealing a new pre-order bonus class.

One of the many sources of Biomutant’s inspiration is martial arts, though it takes more of an over-the-top form here. The video is a montage of the outrageous melee attacks at your disposal, made even more ridiculous by the comic-book-style onomatopoeia that accompanies big hits. The trailer also reveals the Mercenary class, which will be available as a pre-order bonus.

The Mercenary has the ability to dual-wield from the start and sports a katana and smaller Wakizashi blades. Those who pre-order all digital versions of the game and certain physical versions (except the standard physical release) are eligible to receive the Mercenary on launch day. If you’re worried about missing out, don’t sweat it too much. The Mercenary will be sold separately sometime after launch.

Biomutant is being developed by Experiment 101 and was first announced in 2017, so it’s been floating around for quite some time. Numerous delays have hit the ambitious project, and the developer only recently shed light on why that’s been the case. Players can create their own furry mutant fighter who is fully customizable thanks to a range of mutagenic abilities (like telekinesis) that players can “splice” into them. The game boasts a full open world that can be traversed on foot or by using several types of vehicles on both land and in the sky. There’s also a morality system plus the aforementioned deep combat where you juggle conventional martial arts with your mutant abilities. Needless to say, Biomutant is shooting to achieve quite a lot. But if the game can pull it off, it could become one of the year’s sleeper hits.

We’ll find out either way when Biotmutant launches May 25 for PlayStation 4, Xbox One, and PC. How do you think Biomutant’s combat is shaping up? Are you like me and just want to play the darn thing already? Let us know in the comments!

2021-03-25
Previous Post: Apple, AI, and humans in the new work place
Next Post: These New LEGO ‘Star Wars’ Helmets and Droid Will Help You Feel the Force