After numerous teaser images and a behind-the-scenes look during E3 2021, we’ve got our first official colorized image from the upcoming Borderlands movie with Eli Roth at the helm. Even better, everyone’s favorite robot that they love to hate comes bearing a message: “That’s a wrap!”

The Borderlands movie has officially finished filming, which means it won’t be long now until we get a trailer to see how the cast takes to the world of Pandora. But, before we get too ahead of ourselves, let’s start with our first on-set image that isn’t just a vague black shape: 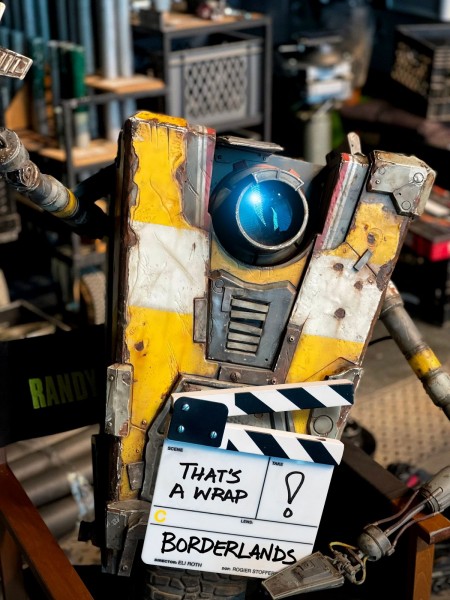 For those that may be needing a little refresher course, the upcoming Borderlands movie will be a live-action take from Eli Roth with an all-star cast that includes names like Kevin Hart, Cate Blanchett, Jack Black, and more.

The story centers around Lilith, played by Blanchett, as she travels back to Pandora (against her wishes) to locate the missing daughter of Atlas (Edgar Ramirez). With a mysterious past and an attitude that could put the fear of god into anyone, Lilith must team up with a band of misfits from the beloved Gearbox franchise to take on this mission and take out some of the biggest baddies on this side of Pandora.

For the full list of characters we know of so far, and who is playing them:

The Borderlands games have been a pinnacle marker for looter shooters ever since 2009 when the first title released. The hilarious dialogue, off-the-wall storylines, and weirdly unique characters all add up to make an incredibly enjoyable experience. The studio behind Borderlands has never shied away when it comes to doing whatever it wants within the realm of Pandora and it will be interesting to see how that creative freedom translates onto the big screen.

Thoughts on our first look at Claptrap and the news that the Borderlands movie has officially wrapped? Sound off in the comment section below!