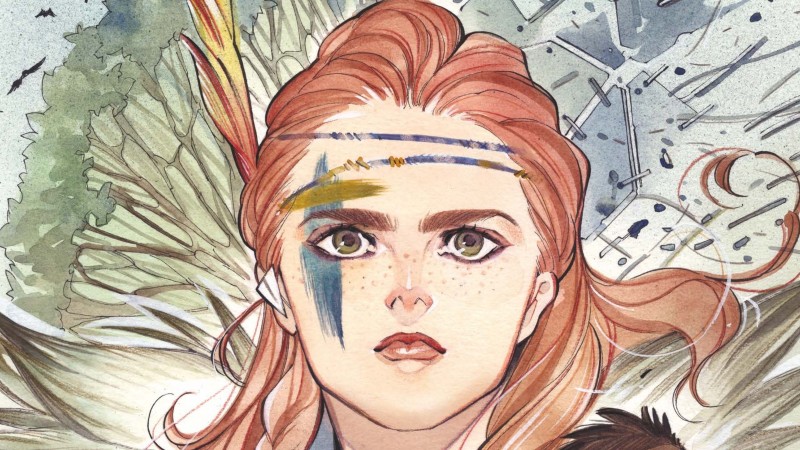 Titan Comics’ Horizon Zero Dawn series is coming back with a brand-new story arc. Titled Liberation, the first issue kicks off this July and takes Aloy and her pal Erend on an adventure with a different backdrop and time period than the previous comic.

Unlike the first comic arc, which took place after Aloy’s initial adventure concluded, Horizon Zero Dawn: Liberation takes place during the events of the first game and follows Aloy and the always confident Erend on a previously untold quest to pursue a mysterious killer connected to Erend’s past. Along the way, Aloy will learn about the liberation of Meridian as well as the details behind the murder of Erend’s sister and Captain of the Carja Vanguard, Ersa.

Writer Anne Toole and narrative director Ben McCaw, who penned the stories for both the game and the first comic series, return at the helm of this new adventure along with new artist Elmer Damaso of Robotech fame. You can check out the primary cover by artist Peach Momoko (Captain Marvel, Spider-Gwen) as well as variant covers from artists including Harvey Tolibao (Uncanny X-Men, Green Arrow) in the gallery below.

Horizon Zero Dawn: Liberation #1 goes on sale July 14 in comic stores as well as for digital devices. You can pre-order the issue from Titan Comics’ website here.  The first comic series launched last fall and ran for five issues and was a big success. Issue #1 alone has sold over 60,000 copies, according to Titan.

In other Horizon Zero Dawn news, the game’s Complete Edition is currently free to download on PlayStation 4 (and, by default, PlayStation 5) until May 14. The bundle includes the base game as well as its expansion, The Frozen Wilds. If you’re impatiently awaiting an update on when the sequel, Horizon Forbidden West, will launch, revisiting the first game as well as this new comic series should provide plenty to gnaw on in the meantime.

Did you read the first arc for the Horizon Zero Dawn comic and if so, what did you think? Share your thoughts in the comments!