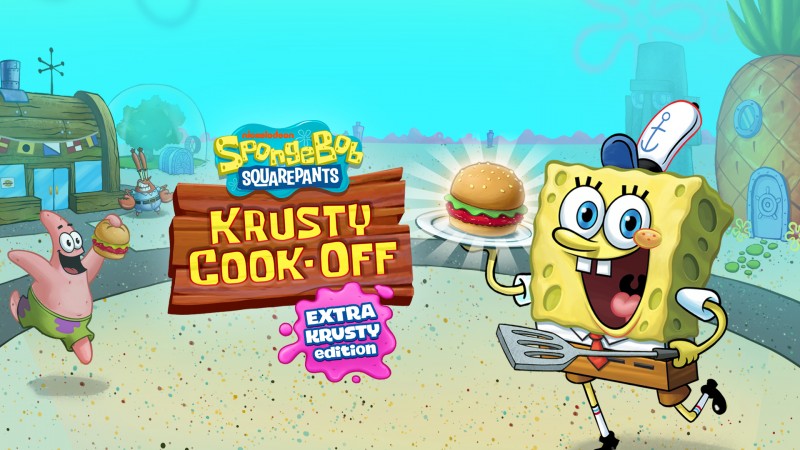 It’s just like the old song says: If nautical nonsense be something you wish, then put down the phone and pick up a Switch! Nickelodeon and developer Tilting Point have announced their popular mobile and PC title, SpongeBob: Krusty Cook-Off, is making its console debut by way of the Nintendo Switch. Better yet, you don’t have to wait to dive in, as it is available now.

In SpongeBob: Krusty Cook-Off, players are tasked with preparing meals in customizable and upgradeable versions of Bikini Bottom’s restaurants. Players interact with characters like Mr. Krabs, Patrick, Squidward, Sandy, and more as they visit iconic locations like the Krusty Krab and Sandy’s Treedome. The game features 400 story levels as players work to become the best fry cook this side of SpongeBob’s pineapple.

The Switched is called the “Extra Krusty Edition” and features platform-exclusive features including unique cooking powers, challenges, and additional downloadable content. The game has been redesigned for its console debut, though no announcements have been made beyond the leap to Switch.

You can see the announcement trailer below.

SpongeBob: Krusty Cook-Off launched on iOS and Android in May 2020. On the back of the Nickelodeon series’ name recognition, the game garnered 17 million pre-registered players in the lead up to launch and landed in the 10 most downloaded games across 97 countries on iOS and 79 countries on Google Play. In its first week, Krusty Cook-Off reached more than 2.2. million daily active users. The game has received a four-star average user review score across more than 260,000 reviews on Google Play and a five-star average review score from more than 105,000 ratings on the iOS App Store. The game has since come to PC via the Microsoft Store.

SpongeBob SquarePants has proven to be one of the most enduring characters of the last two decades. Since his debut in 1999, the beloved yellow sponge has starred in the long-running cartoon series, several feature-length films, multiple video games, and more than his fair share of memes. For more on SpongeBob and Patrick, check out our conversation with those two voice actors from San Diego Comic-Con a few years back.

SpongeBob: Krusty Cook-Off is available on Switch now in the U.S., Canada, Mexico, and Brazil. It arrives on the Nintendo platform in Europe and Asia in the coming weeks.

2021-04-29
Previous Post: New Halo Infinite Details Revealed, Including Crossplay And Cross-Progression For Xbox And PC
Next Post: How to Find, Add, and Remove Fonts in Google Docs