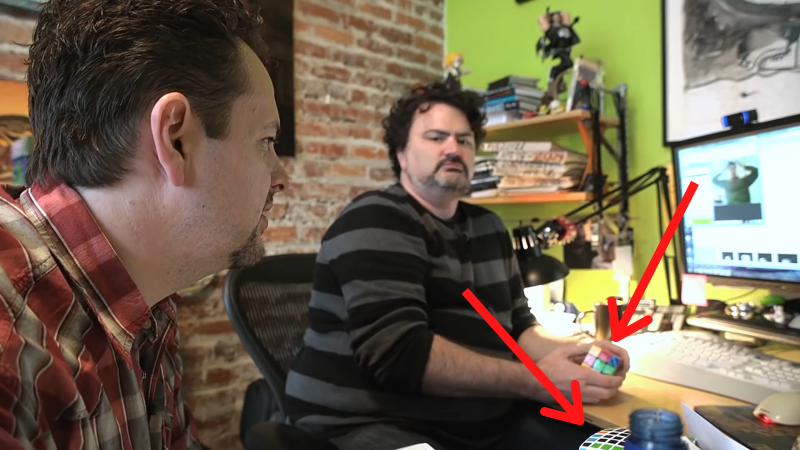 Tim Schafer owns a lot of Rubik’s Cubes. This is something eagle-eyed viewers of Double Fine’s many documentaries might’ve noticed throughout the years. Any scene with Schafer sitting in his office – of which there are a lot – is usually accompanied by many Rubik’s Cubes covering his desk. Or they’re found in his hands, as he quickly works through the Cube’s puzzles in various meetings or work calls.

Take, for example, this scene from Double Fine Adventure episode three. Schafer, sitting next to Double Fine principal artist Lee Petty, is on a Skype call with artist Nathan “Bagel” Stapley as they work out various art directions for the then-in development Broken Age. Based on our frame-by-frame analysis of the scene, three different Rubik’s Cubes can be seen: one in Schafer’s hands, one on his desk between him and Petty, and one atop the couch near the window in the background. While there has been some debate here at Game Informer over whether or not the final Rubik’s Cube counts, as it appears to actually be a small pillow, for the sake of comprehensiveness, we’ve chosen to include it. 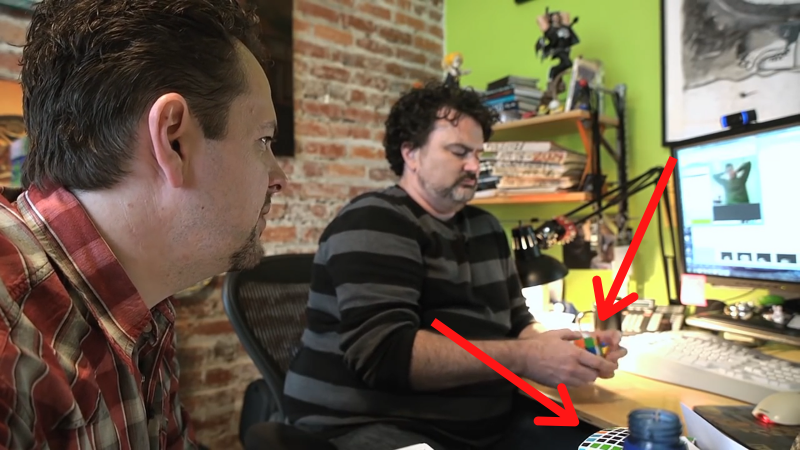 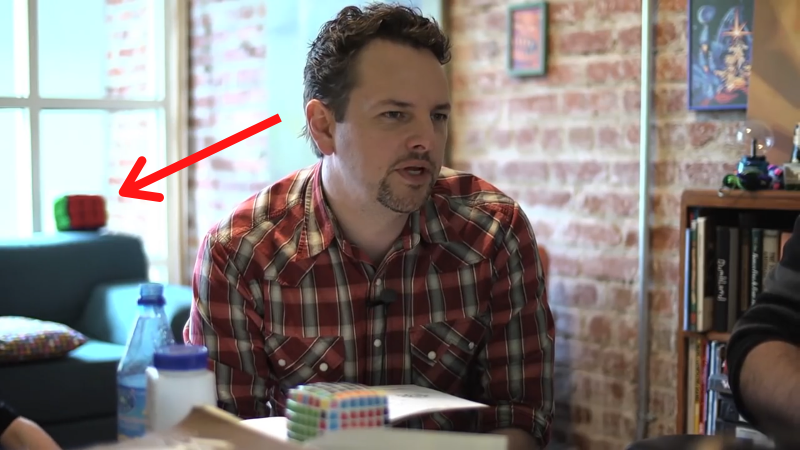 Owning a Rubik’s Cube on its own is not that peculiar; they’re popular toys. In fact, since its debut in 1977 (originally sold as the Magic Cube), Rubik’s has sold more than 450 million of its toys. It stands to reason a lot of people own one. One. That makes sense. But three in an office alone? It’s a bit outlandish.

Being the intrepid reporter I am, I decided to use a chunk of Game Informer’s limited time with Schafer on our recent cover story interviews to get to the bottom of this Rubik’s Cube mystery. The answer might surprise you. But probably not. He just kinda likes them.

In the 1990s, Schafer worked for LucasArts, the game development division of George Lucas’ company Lucasfilm. The team used an internal engine called the Script Creation Utility for Maniac Mansion (SCUMM for short), named after the game the engine was originally made for. When pressed about his Rubik’s Cube habit, Schafer admits that compiling SCUMM games took, as he puts it, an “awkward” amount of time. He’d often be stuck with not enough time to use the bathroom or go to the kitchen, but too much time to sit there and do nothing. So Schafer, needing a way to fill the days, learned to solve a three-by-three-block Rubik’s Cube.

However, many years later, at Double Fine Productions, the company Schafer founded after LucasArts, a never-solved mystery presented itself.

“I learned how to do a three-by-three cube, and then one day at Double Fine, mysteriously, I never figured out who did this, someone left a four-by-four on my desk,” Schafer says. “I was like, ‘Ah, I can’t solve that.’ But the thing that’s different now is that everything you could ever want to do, there’s some kid on YouTube who can do it and will tell you how to do it. So, I was like, ‘I’m going to solve a four-by-four.’ And I was like, ‘Hey, look! I solved it. I don’t know who left that on my desk, but I solved it.’ And then this five-by-five showed up on my desk, and it’s like, ‘Ugh.'”

While Schafer still doesn’t know who left the Cubes on his desk, the mystery escalated all the way to seven-by-seven-block Rubik’s Cubes. Schafer, a man determined, learned to solve them all. In exclusive photos obtained by Game Informer, you can see how large Schafer’s collection has become. Sitting in a small basket on his desk, at least 14 cubes of various dimensions, colors, and complexities can be seen. 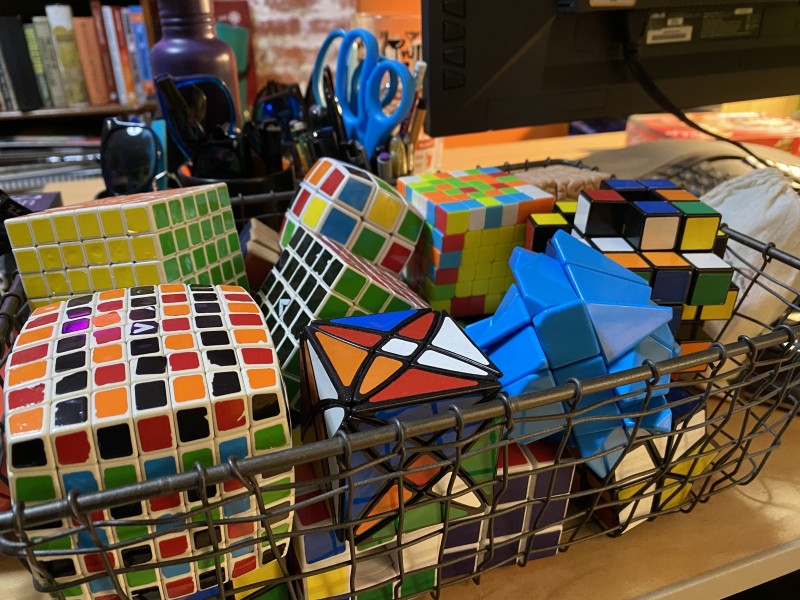 Rubik’s Cubes now consume Schafer’s days, and no 24 hours are complete without at least a few solves of his various cubes. If you ever find yourself on a video call with Schafer, there’s a good chance that just under his camera are fingers hard at work.

“There’s no secret to it, there’s just these patterns and methods for doing it,” Schafer says. “But once you learn it – I solve this stack every day a few times. Because I’m sitting in meetings now, and we’re in these Zoom meetings, and I’m sure you all have things that you’re doing when you’re in a meeting. Like, there’s a lot of meetings where you just have to listen. In a real-life live meeting, I want to do this, but it’s rude because I’m supposed to be looking in your eyes, but I’m messing with this cube. But on a Zoom meeting, I have it down here [off camera] the whole time and no one even knows. It’s fun, satisfying.”

So there you have it – the secrets behind Tim Schafer’s Rubik’s Cube collection and habits (mostly) solved. However, Schafer leaves us with a couple surprising revelations. For one, he’s moved from Rubik’s Cubes to nicer, more high-end cube puzzles from China, ones that spin faster and feel good to the touch. The second revelation is that it’s not just cubes anymore. He’s graduated onto something else far different.

“I have [cubes] for Zoom meetings and then I also have tiny, tiny little jigsaw puzzles that I do at my desk here while I’m in the longer meetings,” Schafer reveals. “Am I the only one who does that? Don’t you go to long meetings?”