Top Of The Table – Assassin’s Creed: Brotherhood Of Venice 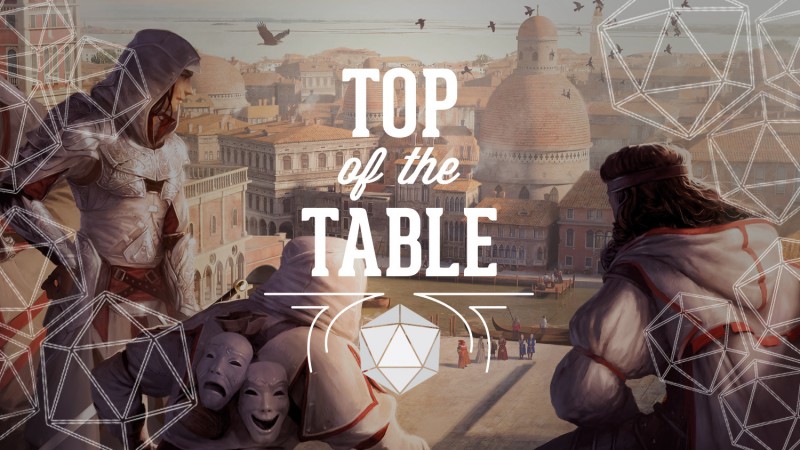 At first glance, Assassin’s Creed seems like a franchise ripe for tabletop adaptation. Rich in character and story, as well as setting options spread across all of history, it would be an exciting project for any designer to bring it to life as a board game. However, like the video games themselves, it’s also a wildly ambitious concept, which demands the combination of numerous mechanics, including stealth, combat, and traversal. And where to zero in within a franchise that has ballooned into dozens of unique mini-settings, heroes, and villains? Years after its initial announcement, and no doubt numerous iterations and improvements, Assassin’s Creed: Brotherhood of Venice is finally here, and sure enough, the resulting release is large, ambitious, and complex. It’s also remarkably fun.

Even among dedicated tabletop enthusiasts, it’s important to perceive Brotherhood of Venice is a connoisseur’s game, squarely targeted at that cross-section of fans who both adore Assassin’s Creed and wish to invest dozens of hours into a shared cooperative board game campaign. For the many hours of fun it provides for one to four players, the core game’s price tag of over $200 can be justified, but no one is going to proclaim it cheap entertainment. The game works hard to earn that high cost of entry. The core release includes over 140 unpainted and highly detailed plastic miniatures. On cardboard tiles and excellent stock cards, the art is subtle and gorgeous. Dozens of distinct scenarios each offer new twists on the action and playstyle. And an over-arching story weaves together an intriguing new branch of Assassin’s Creed lore. 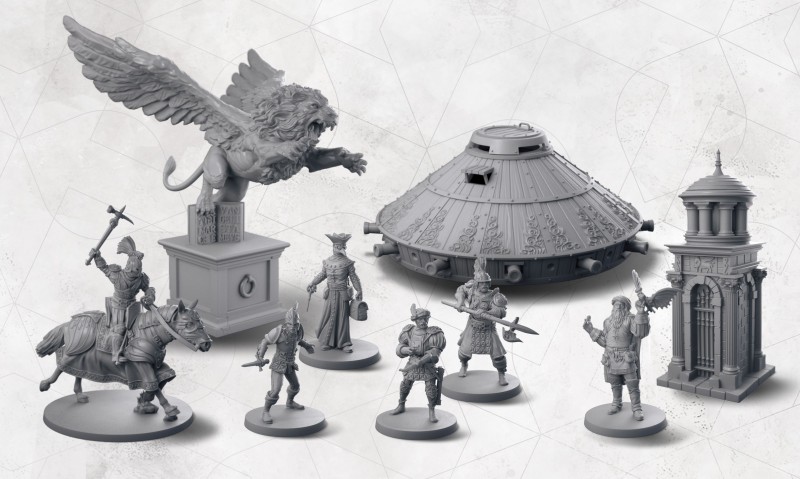 The base game includes over 140 incredibly detailed miniatures

After many hours exploring those scenarios and the unfolding narrative they present, the single feature that most impresses me is Brotherhood of Venice’s deep understanding of its source material. I’ve spent well over a decade enjoying Assassin’s Creed, both in my personal time, and also covering it professionally. Triton Noir has clearly worked closely with the franchise creators at Ubisoft to zero in on the vibe of the series. There’s the unique mix of stealth that suddenly overflows into bursts of action, represented by clever mechanics like dice rolls that move you from incognito into dangerously exposed status. In each mission (or Memory), the players work together to achieve optional objectives, and reach “100% sync” with the Animus. There’s even secret reveals and conspiracy elements that might not become apparent until many sessions into the campaign, looping in elements of the Assassin’s Creed fiction that both surprise and delight. The game even includes entirely optional missions, in place to offer backstory and context for each of the playable heroes.

With the full spread of Assassin’s Creed fiction to draw from, the designers have here chosen to zero in on one period almost every enthusiast can agree on – the active Bureau in Venice after Ezio Auditore takes down Cesare Borgia. Players initially adopt the role of apprentices, and very soon named members as they work together to confront a new branch of the Templar/Assassin conflict. Sessions play out through individual but interconnected memory sequences, each of which is set up using several modular tile boards. Your rewards, failures, and successes often carry over from one session to the next.

Through the use of action cubes to delineate a set number of things each character can do in a turn, and event cards that regularly change the conditions in the field and dictate enemy movement and actions, Brotherhood of Venice should feel familiar to experienced board gamers who have tackled recent “dungeon crawl” games. And while Brotherhood of Venice bears more than a passing similarity to some other dungeon crawling modular board games of recent years, the big difference here is the shift toward stealth. In most cases, outright combat is not the goal, but rather careful movement, positioning, equipment usage, and even retreat or hiding when things go wrong. It’s that focus on stealth that gives the game its distinct identity. Like in the video games, I thrilled at the mounting tension of a given retrieval, escape, or assassination attempt, and the rare moments where my team of Assassins slipped in and out unseen.

Gameplay unfolds on a modular board of tiles, with a unique setup for each mission

If its rich understanding of its source material is the game’s greatest strength, it’s the way the game teaches itself to you that deserves the second highest praise. Following in the vein of games like Pandemic Legacy or Gloomhaven: Jaws of the Lion, early chapters of Brotherhood of Venice are incredibly simple from a rules perspective. It’s very possible to open the game, and quickly move into an initial play, as the game is gradually tutorialized over the early missions – so long as all the players at the table are okay with the regular pausing required to look up newly introduced concepts as they arise. Helpfully, gameplay elements that require additional explanation are clearly marked with a blue diamond and a numerical reference in the rulebook, keeping the need for endless page-flipping to a minimum.

Individual scenarios are explained through an included campaign book, while the new cards and other components required for that Memory are included in a sealed envelope, only to be opened when indicated. That approach allows for some fun surprises, such as unique rewards, like new gear, that only come into your possession upon completion of certain objectives.

During gameplay, those detailed minis represent your Assassin as they range across the city (and other environs I won’t spoil), letting you drop down from rooftops, climb to high synchronization points, or even hide in hay bales. As you infiltrate a given locale, guards are constantly moving and watching, and you’re left to use the tools of the trade to keep things under wraps until the mission is complete. Fling florins to the ground to distract. Has your Brother been spotted? Toss out a smoke bomb to give him a chance to escape. Parachute down onto a hapless crossbowman and then hide his body before the alert goes out. Available actions and equipment might be different from one session to the next, but everything is clearly described by the scenario cards at hand, and often deals with the balancing act between stealth and all-out action. 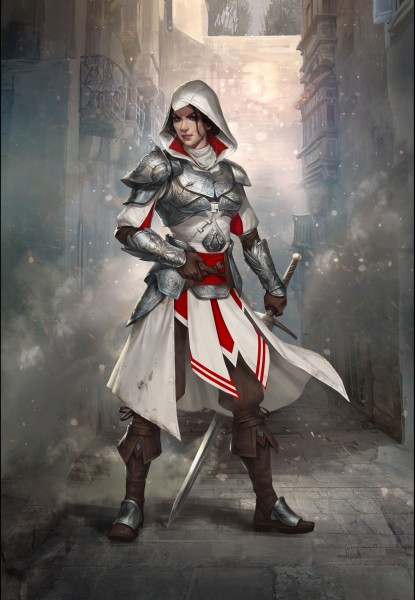 Each of the four playable characters has a unique ability, and even optional backstory elements to uncover

While you’re given plenty of tools to improve your chances during combat, the exchanges themselves are often resolved through relatively simple dice roll exchanges. More often than not, success in combat is more determined by how you prepare for it, rather than what happens during the combat itself. For instance, if you insist on diving down to fight that dangerous boss character before neutralizing his many nearby bodyguards, you shouldn’t be surprised when your health is quickly whittled away.

Because your Assassins can so quickly be overwhelmed, the focus on stealth, and the optional objectives that often suggest more careful play, Brotherhood of Venice certainly leans into its strategic elements, demanding you think ahead and plan each character’s move in advance. But I also like the way that event cards suddenly throw a kink in those plans. Your idea to wait for your chance on that nearby rooftop is all well and good, until the full moon comes out on one turn, leaving you dangerously exposed. The event deck grows with each passing scenario, as does the challenge it represents. While some events offer great advantages, many of the later possible event cards can be catastrophic. Thankfully, by then, it’s likely your Assassin has some great armor, weapons, and other toys to weather the storm.

Between the wild vacillations of the event cards, and the reliance on dice for both the detection mechanic and combat, luck can factor strongly in the game – even with equipment and abilities that can mitigate its effects. That’s not to say that Brotherhood of Venice devalues strategic play, but rather that you can expect any given scenario to sometimes devolve into chaos (much as some of the video game sequences do), and you’re left to scramble to resolve the situation. That’s especially true as those nastier event cards enter the deck in later missions, and the challenge escalates. It’s frankly part of the fun to watch a carefully laid plan fall apart, and be forced to improvise, leading to some of the best moments the game has to offer. But I can imagine some players balking at the way those moments of bad luck take things off the rails. 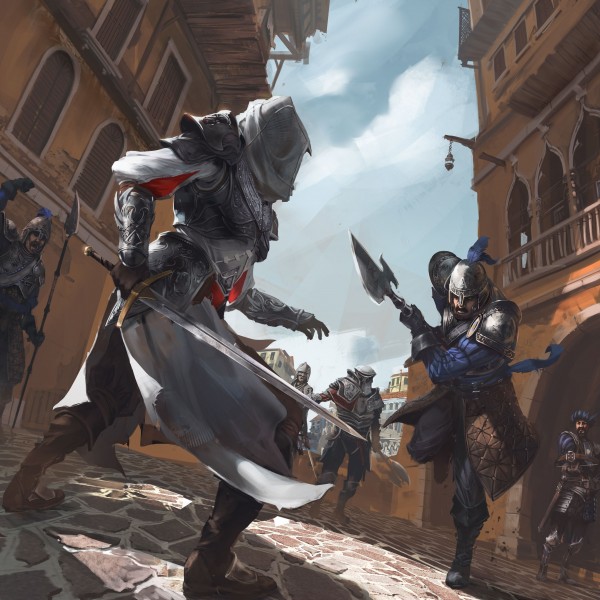 Throughout the game, its artists impressively capture the texture and historical action vibe of the series

Like many campaign board games, I’m forced to hold back on talking about some of Brotherhood of Venice’s coolest twists, rules, and options. It’s enough to say that Triton Noir has looked closely at all the systems, narrative structures, and choices that are often found in the video games of this franchise, and done an admirable job of bringing them to life in a tabletop format. Many fans will be delighted by additional aspects of play, as well as characters, who come into the mix many sessions down the road, but the details of those discoveries are best left to you.

Assassin’s Creed: Brotherhood of Venice had a long journey to come to completion, and the time commitment required to fully enjoy it, not to mention the financial investment, are both very reasonable causes to give pause before a purchase. With that said, the years of development have led to a nuanced and smart game that I found to be balanced and challenging, but infrequently frustrating. The rules and interlocking systems are eventually relatively complex, but I’ve rarely encountered a big game like this that so ably ramps you up into the challenge, without hurdles.

If you’ve always loved Assassin’s Creed, but hoped to find a way to experience one of these stories with your real-life friends at your side, this is a cooperative venture that can keep your group busy for many weeks of play, with new and exciting moments of discovery at regular intervals. While the dice-based combat and resolution mechanics fail the innovation test, the overall structure and focus on stealth is novel and engaging. Stack on some top-of-the-line production values and components, and Assassin’s Creed Brotherhood of Venice is a success, well deserving of sharing in the legacy of one of the best new entertainment properties of the last two decades.

While Brotherhood of Venice is wonderful, there’s no shortage of other great tabletop experiences for you and your friends to explore next. If you’re looking for something more affordable or just in a different genre, feel free to peruse our backlog of Top of the Table recommendations, including selections for some of the Best Board Games of 2020, and some of the Best Tabletop RPGs of 2020. And as always, if you need some personalized suggestions to guide your next game selection, don’t hesitate to drop me a line.

2021-06-11
Previous Post: I’m Not Lovin’ It: McDonalds Hit By Data Breach in U.S. and Parts of Asia
Next Post: Forget Humidity, Dew Point Is How It Really Feels Outside