In just about a month’s time, hockey will be back in full force, both if you’re watching the puck drop on your TV or strapping on the skates in NHL 22. This year, EA Vancouver is calling on its elite talent to be the difference-makers, introducing Superstar X-Factors, which provide special skills and moves to the best of the best. This will impact the game by forcing you to anticipate these players’ abilities every time they hit the ice, and they’ll be present in every major game mode. To learn more about this feature and how it’s taking NHL 22 to new places, we sat down with producer Clement Kwong, who also answered some of our other bigger questions about the latest entry in EA’s NHL series.

Some players have reservations about the Superstar X-Factors being overpowered and giving certain teams an edge. For instance, why not just pick the Tampa Bay Lightning every time since they’d be stacked with these abilities? You get an all-star goaltender in Vasilevskiy alongside elite talent in Kucherov, Point, Stamkos, and Hedman. How is EA Vancouver ensuring that the X-Factor abilities are balanced appropriately while remaining fun?

Kwong: There are a couple of things here. One is we’re constantly working with our community, with our EA Game Changers group. Since NHL 16, we had started this specific group with different experts, covering gameplay, Be A Pro, and all kinds of different modes. So with X-Factor this year, in addition to it being available in all modes and having integration there, we also have gameplay experts within that group to give us feedback. We are constantly giving them weekly builds, making updates and gameplay changes, tuning the mechanics. There’s a fair bit of feedback that we’ve gotten already from there.

Second, obviously, is the technical test that just wrapped up. With the competitive balance side of things, what better mode to test it than our CHEL community? If there are any imbalances or exploits, that’s where we find out. So those two data points are really informing any kind of balancing, changes, or tuning we may need to do for launch.

How often do X-Factors activate during a game? I know fewer players have the powerful “Zone” X-Factors, and they’re for the big superstars, but how many times will I see Auston Matthews’ “Shock and Awe” ability hit? Is it every time he goes out on the ice he can do that move, or do you need to do something to activate it?

As opposed to Madden’s design model where you have to throw a [certain amount of] yards to completion on a single play, the game of hockey is different in terms of having line changes, the speed of the game, and it doesn’t have special teams outside of the penalty kill and power play. We had to take a bit of a different approach where the “Zone” and “Superstar” abilities are always active in the right context.

Take McDavid’s Wheels Zone ability, for example. He’s known for being the fastest player in the game, with or without the puck. You’re not going to have his ability if you are in your own defensive zone or if you’re hustling back on a defensive assignment. What you will see, though, is if he has a puck and he’s carrying it through the neutral zone and the o-zone, that’s where you’ll have the ability activated. So depending on the ability, it is contextual. We don’t have a specific trigger or event to activate it; it’s always active in the right context. And the reason for that goes back to what I said earlier; hockey is such a fast sport with line changes. If we put in place a design where you had to trigger it, you really wouldn’t have too many moments. We tested that early on.

It’s been said the X-Factors are going to change up the metagame. How have they changed the way that you play the game?

With the challenge of the pace of the game and the team game, really. I’ll use the example of the World of CHEL. We’re changing up the way we’re building our player classes with a lot of feedback from the community. So far, we’ll say, ‘Hey, this is the go-to [build]’’ and then a day later, it’s like, ‘Actually, no, this is the go-to, here’s how you counter it.” That, to me, is an interesting exploration. It’s not just about min-maxing anymore. Before in CHEL, you tried to stack these abilities, find out different combinations, and which one to give the one extra point. It’s no longer about that one extra point, even though that’s kind of a secondary layer available. In World of CHEL, it’s about your playstyle and the opponents you’re up against.

A short example I’ll use is truculence, which is kind of a big man ability and you can basically bowl over anyone. I tend to play as a smaller build with shot accuracy, or the ability to stickhandle, and I was playing someone and they just absolutely destroyed me, even though they’re [so] much slower. I just could not get around them. So, there have to be different ways to counter those new player classes.

So every player class should feel a little bit different and you have to figure out ways to counter these player types? One of my bigger complaints in previous iterations is every player felt too similar. In CHEL, you could tweak some stats, but they never felt like enough and you’d use similar tactics no matter who was on the ice.

Yeah, I would say definitely more thought needs to go into how you are building your player class and how you’re building players in your lineup. And for Franchise mode, team chemistry plays such a big role. It’s changing the way that you’re building and managing your roster lineups.

Let’s bring up the poke check because it was pretty powerful in NHL 21. Has that been tuned any for NHL 22?

To be honest, that’s something we’ve been hearing a lot during the production of NHL 22 from our Game Changers, who are like, “Hey, where there’s an opportunity, let’s fix poke checking.” That’s where stick and physics come in. So both when you look at the ability side where we’ve separated players defensively, like Victor Hedman or Drew Doughty are much better, much more efficient at poking away pucks without taking penalties. That’s one layer.

The second layer is having the stick actually react realistically. It adds more predictability to how we’re solving for poke checks, both in terms of the force and power that the defenders or the skaters are poking at, as well as how the stick interacts with the body and with the puck. So, the short answer is yes, absolutely. When you boot up the game and you play this year, we’ve made some massive improvements in that area.

Be A Pro got a huge upgrade last year, and this year it’s said to have multi-season storylines. Can you talk about kind of how that’s going to work and what are some of those storylines?

With X-Factors changing the journey in Be A Pro in terms of you wanting to progress and unlock and grow into the most powerful abilities, we needed a way to tell those stories. We wanted to address some of the feedback that we had in terms of, ‘Hey, it was great you had this conversation system, but it’s kind of repetitive and you don’t have multi-season storylines.’ Well, this year, we brought X-Factors, we brought new challenges, we brought in new storylines that span multiple seasons. So you have your example of winning multiple divisions, winning multiple awards, all the way to what Pat Maroon did – winning multiple cups in consecutive seasons with different teams. And what the new challengers allow you to do is unlock new X-Factor points so that you can unlock slots for abilities to assign to your created character.

This is probably a question you get every year, but it’s essential to the gameplay. Whether it’s on defense, offense, or being able to create better plays, what improvements to the A.I. did the EA Vancouver team really focus on this year?

A.I. is an area that we have a yearly investment in. I don’t think there is a way we can say we’re going to fix all our A.I. issues because as our community plays and players play, the A.I. is bound to take some actions that don’t make sense to the player. Specifically for defensive A.I. and joining the rush, we’ve made some improvements and upgrades there, more at the core A.I. level instead of a massive new feature overhaul.

The other piece is how A.I. players support you as a player in HUT or World of CHEL now that you have these new X-Factor abilities. So, with a lot of A.I. players also possessing these abilities, like with passing, for example, they’ve been upgraded to accommodate what it means to have better team play and pass the puck to you when you have the One-Tee zone ability [which gives you advanced power and accuracy on one-timers]. So, there have been minor updates, but it’s something that we chip away at year after year. 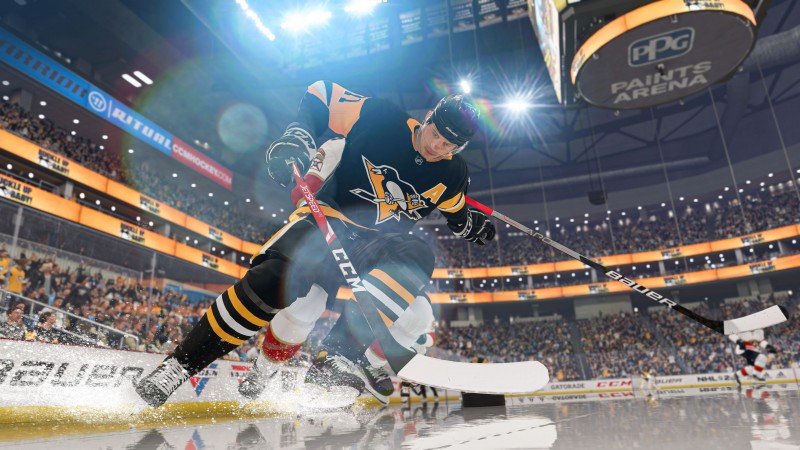 2021-09-14
Previous Post: Steel Assault Arrives On PC And Switch Later This Month
Next Post: The Top 10 Marvel Games Of All Time