Batman ’89 Is The Keaton Sequel I Didn’t Think I Needed, But Now Love

DC Comics just released the first issue of Batman ’89, a six-issue limited series that picks up right where Tim Burton’s Batman Returns movie left off. If you didn’t like Joel Schumacher’s colorful sequels and want to see what would have happened to Michael Keaton‘s Caped Crusader, this first chapter is well worth a look. Many of the plot points established in those films are in play in this first issue, including exploring more of Billy Dee Williams’ take on Harvey Dent. As this series moves on month-to-month, we’ll see him transform into Two-Face.

A strong link of authenticity to those films comes from writer Sam Hamm, who penned the screenplay for 1989’s Batman film and contributed to the story in Batman Returns. Hamm’s continuation works well as a comic and is brought to life beautifully by artist Joe Quinones and colorist Leonardo Ito. This table-setter of an issue places the spotlight firmly on Dent as Batman races across the city. An iconic giant penny is also in play for a nicely designed fight sequence. 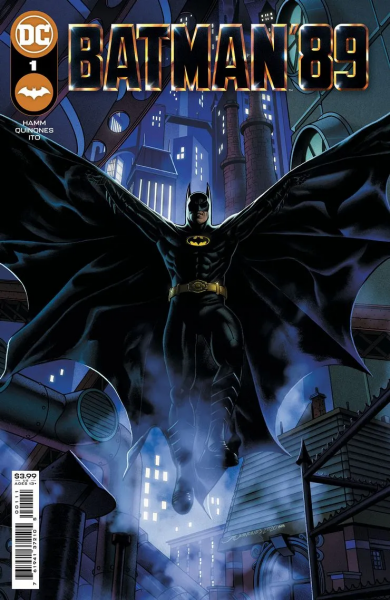 DC’s official solicitation for the series outlines the conflict at hand: “Gotham becomes torn in two as citizens dressed as Batman and The Joker duke it out in the streets. As D.A. Harvey Dent tries to keep the city together, he targets the one problem tearing it apart: BATMAN! And he’ll get Bruce Wayne’s help in taking down the Dark Knight!” DC says that this story pulls on a “number of threads left dangling by the prolific director.”

Later this month, DC is releasing a second movie-to-comic continuation in Superman ’78, a limited series that spins out of Superman: The Movie and continues Christopher Reeve’s take on Clark Kent. This sequel introduces Brainiac into the now-defunct cinematic universe.

If you can get to a comic shop or read books online, I highly recommend giving Batman ’89 ten minutes of your time. Getting to see what that third film could have been good fun, and there’s a chance this film could set up the next Flash movie, which will see Keaton reprising his role of Bruce Wayne and Batman in some form.