Destiny 2: Season Of The Chosen Marks A Significant Turning Point For The Better

Destiny 2 Season of the Chosen is inching closer to closer towards completion, but this week’s step in the Proving storyline featured an incredibly satisfying apex of narrative design that left many feeling pleasantly shocked by this game’s turn of events. Season of the Chosen is vital for many reasons, with the most important one being that it marks a significant turning point for Bungie and the future of the series.

When Destiny 2 first launched, the feedback left little to be desired. While Bungie came right out of the gate with a fleshed-out story that resonated with fans of the space shooter, the endgame content was paltry at best. The first year post-launch was a hellscape, filled with a community fed up with paywalls and apologies to do better from the studio. Then, Bungie announced it was officially separating itself from Activision, the publisher at the head of Destiny 2’s launch. From there, the team had more freedom to realize the vision they had to the start, not an experience reliant upon microtransactions and half-cocked content.

The turn for the better first began with the Forsaken DLC. While not the first expansion for the sequel, it was the first expansion to breathe fresh life into the Destiny community truly. Much like the Taken King expansion did for the first game, Forsaken took the tale Bungie was trying to tell to a much deeper place. With a move that should have ended in disaster by killing the fan-favorite Hunter Vanguard Cayde-6, this DLC was a catalyst for a brighter future. That future is very much seen in the Beyond Light expansion’s newest season with the latest development of the Proving questline alongside Caiatl, Calus’ daughter.

The new season’s premise is that Zavala and the rest of the Guardians have come to a shaky truce with the Cabal with Caiatl at the helm. To prove their worth, Guardians had to take to the Proving Grounds to fight the best of the best when it comes to the Cabal fleet. Each week brought a new step, including some investigative work with The Crow. This reincarnated iteration of Cayde-6’s killer, Uldren Sov, is a character many weren’t expecting to like at all but with this season? Many of us grew not only to like him but to love what he brings to the table.

I previously wrote about how I hated how much Bungie made me love this character, even knowing the motivations and manipulation that Uldren went through. That didn’t matter to me, the endgame was still the same: Cayde, my favorite character, was dead and by his hand. I wanted to hate Crow, even knowing that wasn’t fair. While I was prepared to possibly not totally despise him, I wasn’t prepared to empathize with him and appreciate his character. After the latest reset and this week’s story progression, I can safely say that he is now my favorite character out of the entire franchise. Boy lemme tell, that turn of events was shocking to me, but here we are.

There is a distinct parallel that is flooding Destiny communities. I’ve seen the below image in almost every Facebook group and Discord I’m in. The power this one scene had was felt through the entire player base, and while the Strike leading up to it had a mixed reception, this scene right here had a universal approval from fellow Guardians:

The parallel in question has to do with the Forsaken DLC’s below scene when Uldren (now Crow) kills Cayde. The artistry is profound, subtle, and when paired with the color composition to provoke a more emotive response and a signal that the overall story is evolving?  It’s powerful. 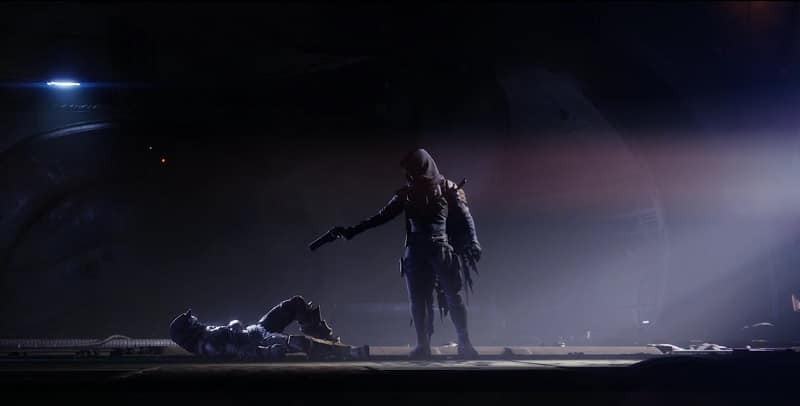 Color theory in entertainment mediums is nothing new. The newest “popular” example is the Snyder Cut of Justice League. The extended version is much darker, aesthetically speaking, and that color choice is meant to evoke a more sinister and powerful feeling when watching the narrative unfold. Games, movies, TV – they all do it; it’s an effective means of conveying certain messaging throughout any given story. Both the Forsaken and Shadowkeep expansions were gritty, visually dark, and dripping with desolation. Beyond Light took a different turn with Europa, but the latest chapter of Season of the Chosen went in a completely different direction with vibrant hues, as seen in that first screenshot.

As mentioned in my breakdown of the evolution behind Uldren and his transition into the Crow (which you can read here), his need to hide his face due to others not understanding that he isn’t the same man that killed Cayde was heartbreaking. When Bungie started hinting that Zavala, the Titan Vanguard that was arguably impacted by Cayde’s death the hardest, was going to uncover Crow’s identity soon, many thought that the revelation would be explosive. When Crow instead thwarts yet another assassination attempt against the Titan when speaking with Caiatl, his mask falls away, and Zavala learns the truth. In a moment of complete stillness, I didn’t know which direction this was going to go in. I audibly gasped and waited to see what his reaction would be to Crow’s identity. That’s when the above interaction happened. Instead of vengeance, Zavala offered trust. Support. Understanding. All of which Crow had been bereft of. It was so incredibly heartwarming and really gave off the feeling of “the calm before the storm,” especially when looking at the undercurrent of corruption felt within Crow’s own story throughout this season and the last.

But this season was a turning point for more than just Crow and how he fits into the bigger picture; Caiatl was also an interesting development. Throughout this entire season, it was unclear if there would be a peaceful resolution with the Cabal leader or not. After the first assassination attempt failed and the lore was uncovered via the grimoire, the story could have gone either way. When the second assassination attempt failed, Caiatl truly showed off what a badass she is. The way she absolutely bodied the psion that tried to take out our favorite Titan was nothing short of epic. She wasn’t a badass because she was given “permission” to be; she’s a badass because she’s a freaking badass in her own right. She’s powerful and not because that power was given to her by Calus. She earned it. Honed it. Bent it to her will, and that alone makes me incredibly excited to see where Bungie takes her story next.

The entire setup of Season of the Chosen fixed a lot of issues that players had with previous seasons. With seasons of the past, pacing issues have been noted, erratic progression and meaningless grinding all played a part in why previous story arcs were hit or miss. Season of the Chosen took all of that feedback and applied it expertly, giving players a season that feels natural, rewarding, and like the perfect setup for the future of Bungie’s narrative. The cinematic parallels, the meaningful objectives, the actual storytelling that occurred all combined to make a gameplay experience that truly feels like a new beginning. Bungie has stated that the Destiny 2 story is far from over. If Season of the Chosen is any indicator, we are in for a wild and incredibly fruitful ride.

What do you think about Season of the Chosen so far? Do you agree that this is a turning point, or did you not vibe with it in a similar way? Where would you like to see Bungie take Destiny next? Sound off in the comment section below. Do it for Cayde.