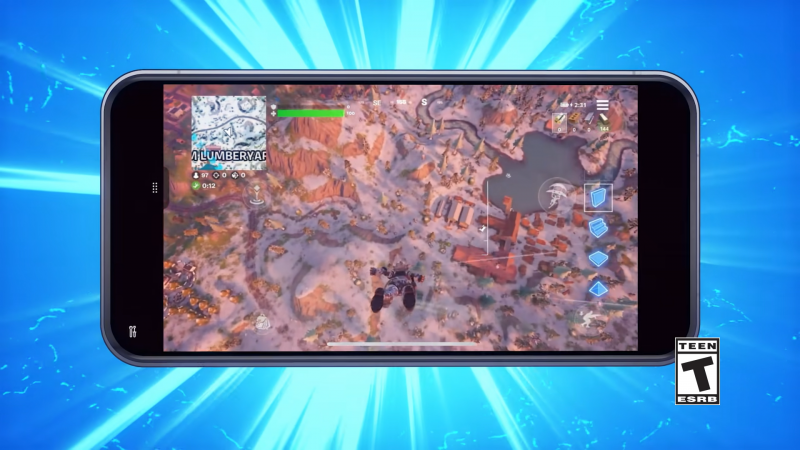 Epic Games is partnering with Microsoft to bring Fortnite back to Apple devices by making the battle royale available for free on the Xbox Cloud Gaming service. This way of playing Fortnite makes the game available, starting today, through a supported web browser on iOS and Android phones and tablets as well as PCs.

Moving to the cloud circumvents Apple’s App Store, which Fortnite is currently not on due to actions leading to a lawsuit that began in 2020 and continued well into 2021. Epic Games had forgone iOS App Store policy by allowing Fortnite users to pay Epic directly for digital purchases such as microtransactions, side-stepping Apple’s mandatory 30% cut on these transactions on its platform. The two companies fought in court over the legality of Apple’s business practices, which led to an injunction calling for Apple to put an indefinite pause on preventing app developers from including links to external sites for alternative ways to pay than solely through the App Store. Fortnite was removed from the App Store in August 2020 and hasn’t returned since, leaving iOS players with no option to play the game on the platform until now.

Epic Games CEO Tim Sweeney took to Twitter to boost the announcement, mentioning specifically how his company won’t have to be subject to Apple’s payment policy. He says, “Monumental news everyone! Fortnite is now available to play FOR FREE streaming to web browsers on iPhone, iPad, and Android via Xbox Cloud. No subscription required, no 30% Apple tax.”

Monumental news everyone! Fortnite is now available to play FOR FREE streaming to web browsers on iPhone, iPad, and Android via Xbox Cloud. No subscription required, no 30% Apple tax.https://t.co/eHs1Xvh6D2

Typically, streaming games using Xbox Cloud Gaming requires a Game Pass subscription, but those requirements are waived for Fortnite. According to a blog post from Microsoft’s head of cloud gaming, Catherine Gluckstein, those who want to play Fortnite through the service only need to make a Microsoft account and go to Xbox.com/play to start dropping on the Fortnite island. Well, you’ll probably need an Epic login, too.

Fortnite on Xbox Cloud Gaming will support touch screen controls for those who prefer to smear up their screens and any controller that Xbox Cloud supports.

Are you going to try out this new way to play Fortnite? Have you been waiting for the game to return to iOS devices and are itching to see what the newest season is all about? Let us know in the comments!

2022-05-05
Previous Post: NVIDIA Finally Offers 4K Cloud Gaming for Windows and Mac Users
Next Post: What Is Wi-Fi “Wardriving” and How Can You Protect Yourself?