Fortnite Unleashes Raptors And Other Predators On Its Players 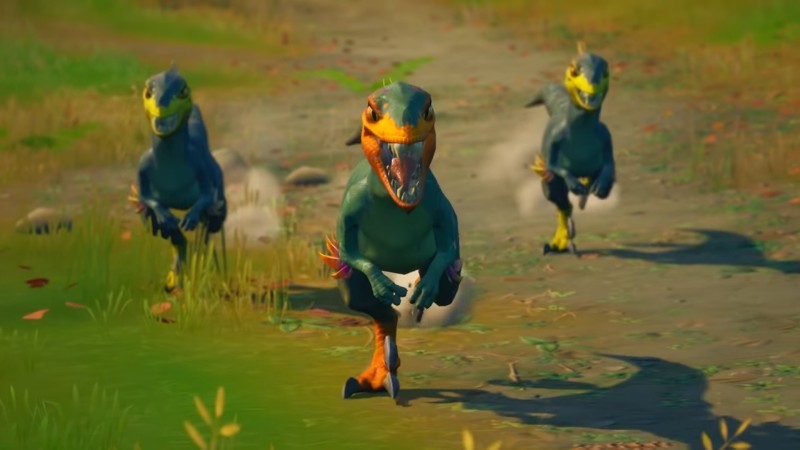 Raptors have invaded Fortnite! As a part of Fortnite Chapter 2, Season 6 raptors, alongside other deadly critters, are prowling the island looking to devour any hapless players unlucky enough to cross their paths. The news comes alongside a big performance boost to the Switch version of the game and definitely lives up to the seaon’s “Primal” moniker.

The extinct predators were previously teased when players began discovering egg nests scattered across the map. Those eggs have attached into full-grown, door-opening (not really…but who knows?) reptiles, and these equal opportunity killers will pounce on anyone unfortunate enough to enter their crosshairs. If that’s not scary enough, raptors always travel in pairs. Any Jurassic Park fan will tell you that it’s never the raptor you see in front of you that does you in; it’s the one you didn’t even know was there.

Raptors aren’t the only beasts to worry about. Wolves and boars have joined the fray as well. Wolves are slightly less aggressive than raptors in that they will only attack if startled. If they do strike, you better watch out. Savvy players can entice the pups with meat to have them join your pack, or you can hunt them down to use their bones as crafting Primal versions of your basic weapons. Boars are shy and will either flee when disturbed or try to gore players. You can placate them by tossing vegetables for them to snack on.

Instead of running or fighting, how would you like to tame these predators instead? Craft the Hunter’s Cloak using materials gathered from hunting the newly added chickens and frogs which emits a scent that lulls any predator to your cause. Who doesn’t want to charge opposing players with a raptor at their side?

In addition to wild animals, Fortnite Season 6 also brings Lara Croft into the fold. How do you feel about facing down raptors in Fortnite? What other crossovers and additions would you like to see? Let us know in the comments!