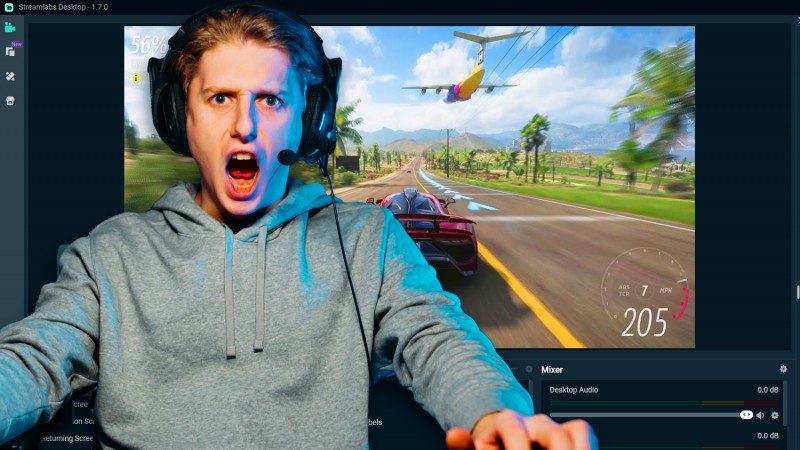 Popular Gran Turismo 7 streamer, LifeIsAHighway79, has seemingly been canceled after a disturbing discovery that he plays Forza Horizon 5 in his off-time.

LifeIsAHighway79, otherwise known as John Jacobs William, was finishing up a 13-hour stream of Gran Turismo 7 –  where each time he lost a race he explained that the game was busted and “buggy as hell” – when he told his viewers that he needed to take a break and eat some “chicky nuggies” heavily dipped in BBQ sauce.

William told his audience that he’d be back in about an hour to stream the same race he had lost multiple times in earlier and seemed to shut his camera off. However, the streamer forgot to kill the audio because after about 15 minutes of ASMR chewing sounds, viewers noticed themselves bobbing their heads to a familiar soundtrack. After the soundtrack continued to rip, song after song, they realized it could only be one thing: Forza Horizon 5.

“I just couldn’t believe it,” one viewer told Game Infarcer. “He always plays Gran Turismo 7 because it’s just better than Forza Horizon 5. Like, they’re both trying to accomplish the same thing in the racing space, and just like, Gran Turismo 7 does it better. You can’t really argue that. But yeah, he was clearly playing Forza Horizon 5. I threw up on my keyboard – that’s how angry I was.”

“I had given this guy $5 last month to help him buy that $185 digital car and this is how he repays the Gran Turismo 7 community? I won’t be watching LifeIsAHighway79 anymore,” someone else in William’s community said.

Another viewer told Game Infarcer that they hate William now.

“Let me say this: I speak for the entire Gran Turismo 7 playerbase and he has stained the delicate leather interior that is this community. He has soiled the name of Gran Turismo 7, ruining its purity and respect and love for the art of simulation racing.”

Gran Turismo 7 director Kazunori Yamauchi released a statement on the PlayStation Blog in regards to the situation. Here’s what it said:

“Why don’t you try growing up, LifeIsAHighway79? You want a bunch of random cars thrown at you at all times while a banging soundtrack plays. Yeah, well guess what – Gran Turismo 7 isn’t that. Go enjoy Forza Horizon 5 or heck, try DriveClub. I don’t care. As for me and my crew, we’ll be measuring the distance between the outer side of our tires and the middle point of our axel to further increase our propulsion and suspension on the track that YOU ARE NO LONGER ALLOWED ON.”

William has publicly apologized on Twitch and by posting an iOS Notes app screenshot on Twitter, but his viewers tell Game Infarcer he’s still canceled. Public documents show that despite being canceled, William is still making plenty of money by streaming. In fact, he’s actually making more money now than before he was canceled.

2022-04-01
Previous Post: You Can Finally Play As A Horse In Among Us During April Fools’ Day Only
Next Post: Game Infarcer: How Twisted Metal Black Helped Me Cope With My Divorce