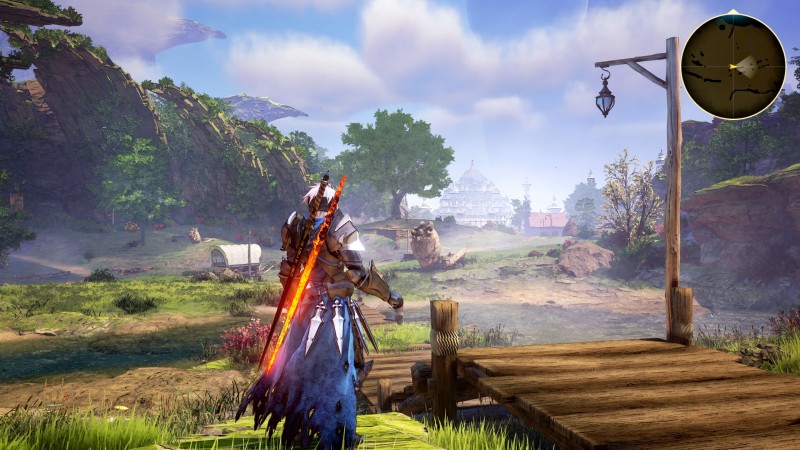 I’ve been a longtime fan of the Tales series; whether it was watching Symphonia’s Llyod confront his naivety or seeing Abyss’ Luke realize he’s kind of a jerk, I love how the main characters become better versions of themselves through the bonds they build. While Tales’ strongest features are its character interactions and the fast and fun action combat, it’s struggled this last generation to both appeal to modern gamers and provide something new and exciting for its longtime fans.

Tales of Arise is being called a “reinvention” for the venerable, if stuck-in-a-rut, franchise. Any time a long-established series uses the word “reinvention,” it’s hard not to be skeptical. Change is scary and risky, as developers try to toe the line between retaining the elements that fans cherish while also evolving the formula in different and interesting ways. I wasn’t sure what side Tales of Arise would land on, but after going hands-on with the game, I feel much more confident in Bandai Namco’s new vision for the series due to some smart tweaks to combat and a new interesting world that begs to be explored. Here are some of my big takeaways. 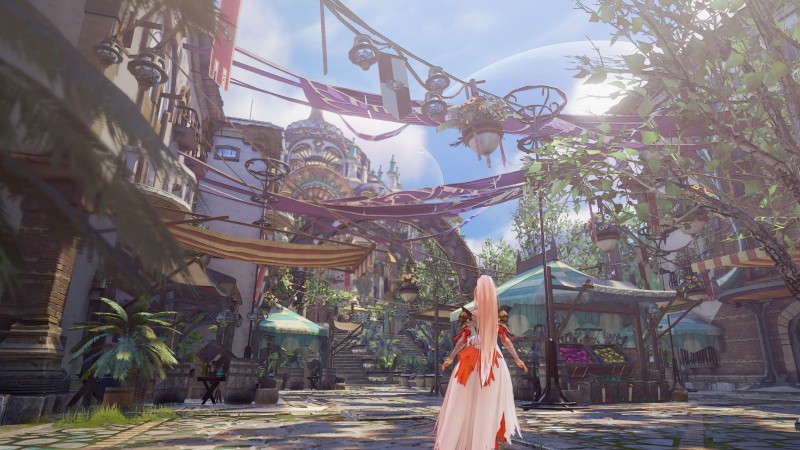 A Vast World With Cool Discoveries

The hands-on demo didn’t offer much in terms of story or character personalities, outside of allowing us to see protagonists Alphen and Shionne bickering. The demo did, however, highlight part of the game’s third region called Elde Menancia, which looked more rural, focusing on nature’s beauty with forests, streams, and even a hidden waterfall for good measure. The demo took place about 10-20 hours into the main story, when you finally have all your party members.

What stuck out about the world to me – outside of the breathtaking watercolor-like aesthetics – was just how much is hidden off the beaten path to discover. From items such as ores for crafting to ingredients for recipes, there always seemed to be a reward for taking the time to explore. This includes stumbling upon special treasure chests, where I found valuable materials, such as accessories and better weapons. At one point, I came across a small farm with cows, pigs, and horses grazing, and of course, the cows provide milk to use in cooking recipes. Yes, cooking is back. Bandai Namco said it will talk about this feature more at a later date, but so far it looks like what we’ve come to expect from these types of systems, offering stat boosts in battle, like giving you more attack power for a certain duration.

Alternate paths are all around if you seek them out. Later, I found a hidden stream, which had a waterfall with a small cave housing a valuable chest. I played the demo three times, and each time I found a new discovery, whether it was a hidden area or treasure to unearth. It appears that Bandai Namco is packing a lot into the zones, so they don’t feel like big, empty spaces like in previous games. Tales of Arise isn’t open world, but it certainly feels grander than any other Tales game. 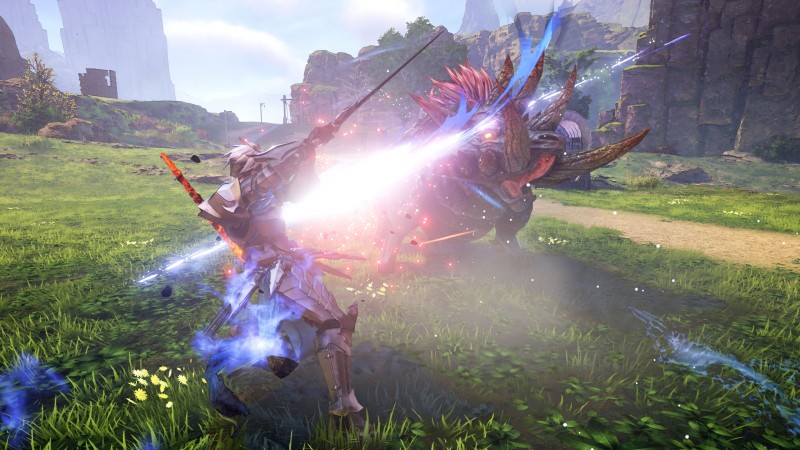 A strength of the series has always been its fast and fluid action combat that’s focused on chaining up combos and pulling off flashy moves. That isn’t changing; the action is still fast-paced and combo-driven, where you swap between regular attacks and your artes (special moves that cost points to use). You can string up to three normal attacks together, but this limit can be increased once you learn certain skills. Jumping and attacking in the air also causes characters to unleash different normal attacks, which is a nice touch and adds some variety to how you play and what moves you want to chain together.

The controls are a little different than previous games and it did take me a few battles to acclimate to them. Your regular attacks are executed using the right bumper, while all your artes are on the face buttons. The right trigger acts as your defend/evade. If you time your evade/guard just right, you perform a perfect evasion/guard, nullifying any damage and giving you the opportunity to counterattack by pressing attack.

You have two things to keep track of as you fight: AP (artes points) and CP (cure points). The former is all your special, damage-inducing attacks, while the latter is your support and healing artes. New to this entry is boost strikes –potent, one-hit kill co-op attacks – that can be executed once you fill a gauge up through combat. These are more likely to occur at low enemy HP and higher combo counts. In addition, every character also has their own unique boost attack, which you can use in battle with the d-pad. Filling up a boost gauge, which charges over time and by landing attacks and counters on enemies, enables you to activate these.

I was impressed with how smooth the controls felt, the variety of attacks at my disposal, and the satisfaction that comes from delivering those satisfying cinematic special moves. The battlefield remains chaotic, which means it can also be hard to keep track of where everyone is when the action heats up. Four total party members can be on the field at once, with two others in the support spots. At any given time, you control one character, but can swap to others in an instant. You can also play around with the party tactics, which allows you to focus your members on attacking, healing, or taking the default, balanced approach. 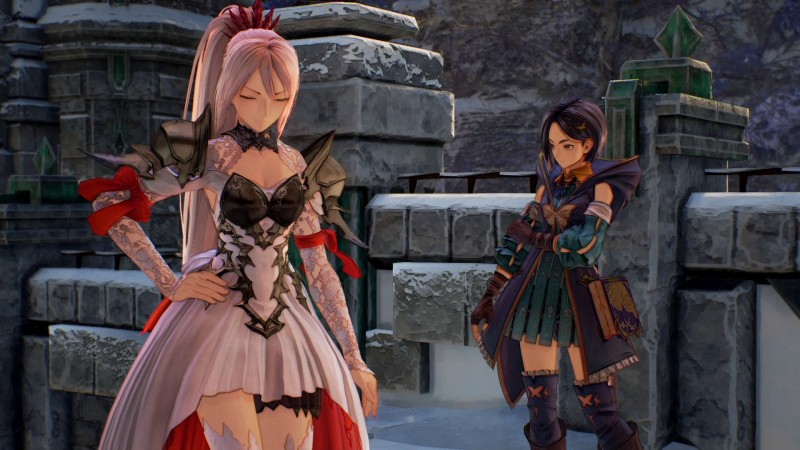 Party members all have something different to offer in terms of their playstyles, and each one has their own special perk and boost attack. I played the demo multiple times using various party members, and my strategy shuffled depending on who I controlled, offering a new and exciting feeling to how battles played out.

I started with knight Kisara, who wields a giant hammer and has a huge shield to match it. With her strong offensive and defensive capabilities, she’s perfect to fight on the front lines, but with big weapons and armor comes slower attacks and movement. Thankfully, Kisara’s perk is Guard Ignition, which means she uses her shield to block attacks instead of dodging them outright. She can even trigger some artes while guarding. If you successfully block with her shield, it raises her morale, making any artes and combos unleashed during this time stronger and harder to block.

Kisara is a more advanced character to learn; she’s powerful but you need to use her abilities wisely to get the most out of her. For instance, her massive shield can also protect others, but that requires paying attention to your party members and the enemy in front of you. Like I said earlier, battles play out fast and chaotically, so this isn’t exactly always easy. It took me some time to find my rhythm with her, but she’s fierce and her boost attack can be a big blessing, as it downs any enemies it hits, weakens their charge attacks, and boosts all allies’ defense, both physically and elementally.

The next character I tried was mage Rinwell, who, as expected, relies on magic-infused artes. Rinwell’s casting takes time, but her magic has far reach and is extremely potent. For her perk, she can charge up her magic; all you have to do is hold the arte button down to boost its power, and let go to unleash it. Better yet, you can charge a cast up and save it for later by pressing the bumper, which will activate it after your next attack/arte. However, that’s not all to this special charge power, if you cast the same arte in succession to the one currently charged, they combine into a higher-tier spell.

My strategy was to get as far away from the enemy as possible to perform a charged-up cast before an enemy could thwart my plans. This wasn’t an issue for me in regular battles, but in the big boss battle I took on, I had to restart my casts a few times in order to dodge incoming attacks. Rinwell’s boost attack can cancel an enemy’s magic attack; if she executes it while they’re casting an arte, it not only downs them, but she steals the spell, charges it, and then blocks them from casting it for a while.

The last character I experimented with was close-quarters martial artist Law, who is a purely offensive character. Expect to use his fists and feet to distribute flurry after flurry of strikes to overwhelm foes, but also be aware that his low defense means you have to keep your hand on that evade button. Law was by far the fastest, most get-in-the-action character I played, with rapid diving kicks and fiery punches.

Law’s perk, Awakening, raises his concentration the longer you avoid hits; this ups his attack and elemental power. The boost ends once he gets staggered or fails to land hits for any period of time. What you give up in defense, you gain in power. His boost attack, Breaker Fist, is highly effective on armored baddies, breaking through their defense and downing them. 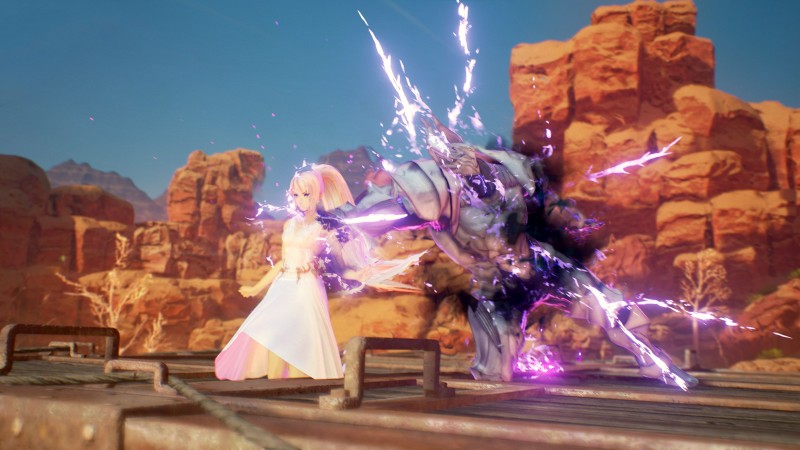 More Strategy Is Part Of The Fun

The high action and flashy moves have always been fun in the Tales series, but the core strategy has certainly revolved around combos and special moves. As you can see with the different characters and their abilities, there appears to be much more to think about on the battlefield than mashing buttons at opportune times. From what I played, the addition of boost attacks alongside character perks really changed how I thought about battles.

It all came together for me in a boss battle against a giant mantis, where I realized I had to study my enemy for success. Bigger foes now have weak points you can target to take them down faster, and this is essential in boss battles. With the left bumper, you can swap to different targets on the enemy’s body, and the weak points will usually have an orange glow to draw your eye. Attacking these orange cores and breaking them immediately downs an enemy, making them take increased damage from your strikes, so it’s smart to also use boost attacks during these windows. Combos also have diminishing returns if you repeat the same arte multiple times for four actions. This forces you to try different combinations and not rely on the same tactics.

Between targeting the mantis’ weak points, evading its big moves like a charge attack that could send my characters across the screen for high damage, and calling in boost attacks and strikes after I chained enough combos, I ended up victorious. However, it wasn’t easy and it wasn’t a short battle. This fight really showcased the increased strategy behind the combat, and I loved how the adrenaline rush of it all.

Tales of Arise makes a lot of smart tweaks to Tales’ core formula. I can’t say much about the story, but I saw a lot of promise in what I played. Varied enemy types with different weaknesses and characters having their own special skills via boost attacks to capitalize on feel like steps in the right direction. Time will tell how it stakes out, but I’m optimistic about the future of the franchise.

2021-06-17
Previous Post: Madden NFL 22 Preview – Hoping For A New Set Of Downs
Next Post: Satechi’s Latest Mac Keyboard Costs About Half the Price of Apple’s