Last year, actor Keanu Reeves, New York Times bestselling writer Matt Kindt, and artist Ron Garney launched a Kickstarter campaign for BRZRKR, a comic book series about an immortal warrior who is drawn to look like Reeves. The campaign was embraced by over 14,000 people who combined to pledged a whopping $1,400,000 to get this project made.

Supporters of that Kickstarter receive the full story within three hard or softcover books. If you missed out on that campaign, and are interested in this comic, which Reeves co-writes (and kind of stars in), you can pick up the first issue today at your local comic book store. Published by Boom! Studios, BRZRKR is worth tracking down, as almost every page shows Reeves in action, being brutal and effective much like John Wick. Reeves’ wavy black hair and low-key attitude are also delivered in almost every frame.

The action takes center stage, and there’s little story progression until the final pages of this first chapter, but big reveals are delivered, one of which is tied to Reeves’ character, Berserker, eating a pill that is both red and blue in color. Berserker is a half-mortal, half-god with regenerative powers much like Deadpool’s. He’s lived and battled for centuries, yet ends up working for the U.S. government as the person who tackles assignments that are too dangerous for any ordinary human.

If you ever wanted to read a Keanu Reeves story written by Keanu Reeves, you now have a chance to see how wild it can be. Reeves’ comic book persona is reminiscent of many of his on-screen roles. It’s quite cool to see how well it plays in print.

The first issue features many covers to choose from, with the standard edition created by the great Rafael Grampá (which you can see below). 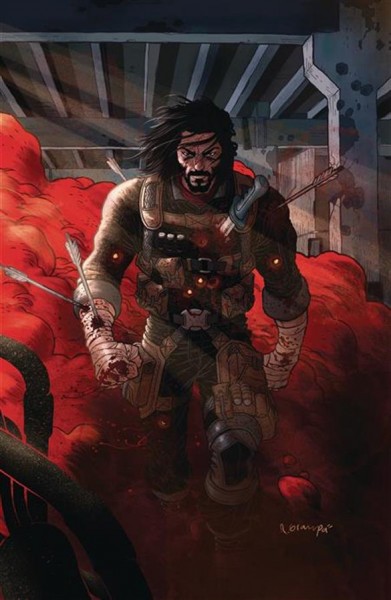