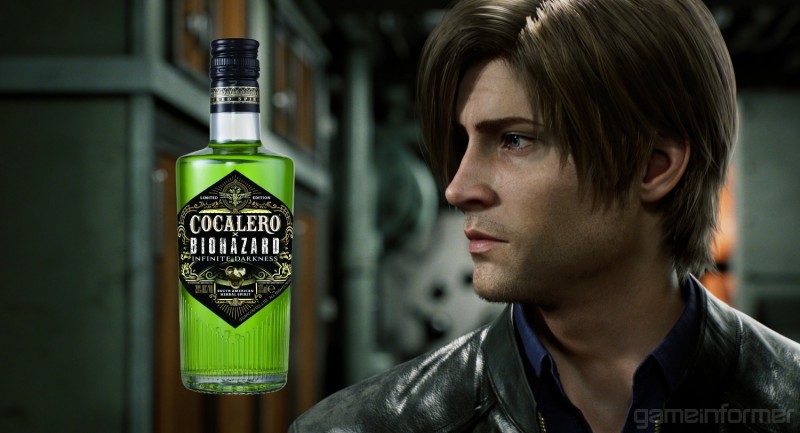 Now that the Resident Evil Village hype has died down a little bit post-launch, it’s time to look at the future ahead. With new games on the horizon and several more adaptations, there is still more horror goodness on the way. One such project is Netflix’s Resident Evil: Infinite Darkness, the new animated TV series coming soon to Netflix. To celebrate the latest show adaptation of the Capcom franchise, Cocalero, an herbal spirit, is releasing an official Resident Evil drink line.

Cocalero is an herbal liquor that is still fairly new to the Georgia area Interestingly enough, this brand has become a hot commodity in the Japanese club scene, including Cocalero bombs that mix red bull.

This particular brand is Irish but draws from Incan inspiration, according to Paste Magazine (via Kotaku). With South American coca leaves as its base and a few other botanical ingredients to make it unique, the new drink line seems interesting if nothing else. With guarana and ginseng among the ingredients, the site’s description of gin meets energy drink doesn’t seem that far-fetched.

The Cocalero Biohazard, which you can see the Infinite Darkness label on the marketing itself, is set to go live this July. It’s not the first gaming x booze hybrid. Assassin’s Creed also has a pretty impressive wine line, and it’s actually pretty tasty! There are more, as well, and many more to come in the future. But green liquor? I don’t know, seems pretty appropriate for a Resident Evil collaboration.

Regarding the upcoming TV show that the new drink is promoting, it is produced and supervised by Capcom’s Hiroyuki Kobayashi of Resident Evil fame. TMS Entertainment, which has birthed various anime series, will produce the series, while Quebico, led by Kei Miyamoto, the producer of Resident Evil: Vendetta, will be leading the full 3DCG animation production.

Resident Evil: Infinite Darkness takes place in the year 2006, two years post-Resident Evil 4. The series starts off with the U.S. President, Ashley’s father, having to evacuate the White House after yet another hostile takeover takes place. In the universe that can’t seem to catch a break, fans of the iconic horror series from Capcom have a new adventure to partake in, and it’s set to go live on July 8.

What do you think about the Resident Evil: Infinite Darkness drink crossover? Does this Ireland-man herbal blend sound good to you, or is a hard pass? Sound off with your thoughts in the comment section below!

2021-05-24
Previous Post: How Hackers Are Using Raspberry Pi to Hack ATMs
Next Post: How to Mirror Your Android Phone’s Screen on Amazon Fire TV

END_OF_DOCUMENT_TOKEN_TO_BE_REPLACED

10 Chromebook Features You Should Be Using

Konstantin Savusia/Shutterstock.com Chromebooks may not be as feature-packed as a Windows laptop

Amazon Freevee Loading screens are nothing new, and many video games over

Gathered after a tragedy befalls our group, I attempt to calm down

This week on All Things Nintendo, Brian invites fighting game expert and