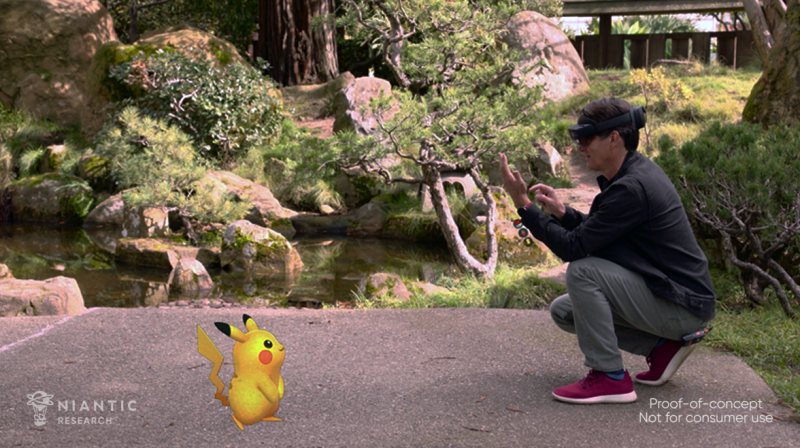 When Pokémon Go first released back in 2016, the world was unanimously happy for about two weeks as fans of the pocket monster franchise took to the real world to “catch ’em all” with the geocaching game. Eventually, the hype died down and the game evolved quite a bit to keep players invested by including things like raids, trading, and even more highly desirable features. Now, the mobile adventure is making its way to the world of HoloLens and if this demo from Microsoft and Niantic is anything to go by – it’s a good move to make.

HoloLends is a pair of mixed reality smartglasses from Microsoft that aims to take reality as we know it and make it even more integrated with the tech all around us. In this demo, Microsoft shows off how the mixed reality peripheral pairs with Pokémon Go to take the caching game to an entirely new level for dedicated players.

With the Microsoft Mesh mixed reality experience launching today, the tech company shared a demo of what the Pokémon Go experience looks and feels like when using the HoloLens 2. The above demonstration is a proof of concept, which just means this may not be the final version that the consumer base will see, but from what was shown this looks like it could be an incredible jumping start for the future of Pokémon Go.

When Pokémon Go first came out, it was so much fun going out and exploring the area around me. Suddenly, I saw everything through a new lens, making even the most mundane environments seem exciting and new. Remembering that feeling at launch has me excited to see this HoloLens demo. While I personally have no vested interest in this particular peripheral, blended gaming experiences like this out in the wild may just be enough to pull me – and others like me – in.

“While this demo is not intended for consumer use, it offers an early glimpse into the future evolutions in both software and hardware,” says John Hanke, CEO and founder of Niantic, over on the official Niantic website. “We’ve only scratched the surface. We know the years ahead to be filled with important achievements which will serve as waypoints in AR’s journey to become a life-changing computing platform.”

What the future will look like is still up in the air, but so far it looks pretty heckin’ cool. What are your thoughts on the HoloLens 2 Pokémon Go demo seen above? Sound off with your thoughts in the comment section below!

[Source: Niantic via The Verge]