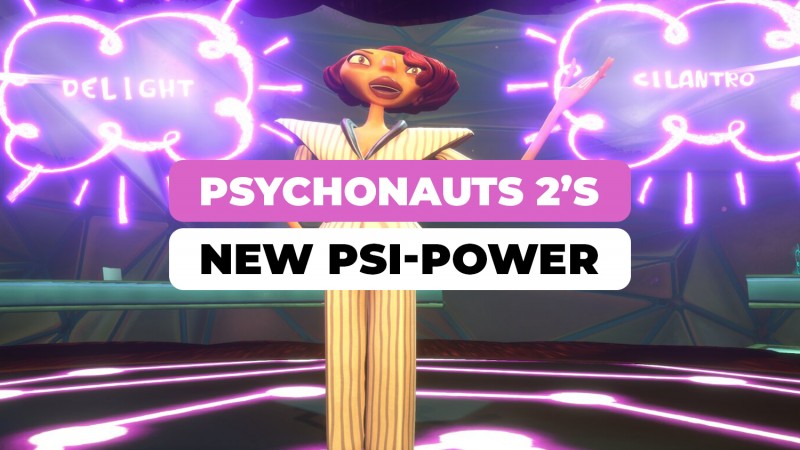 Anyone who stepped foot into the Whispering Rock Psychic Summer Camp in the original Psychonauts understands the charm of Double Fine’s iconic platformer. That’s largely due to Raz, Lili, and the rest of the crew, but it also stems from their unique psychic abilities, which made for a memorable gaming experience. With our heroes returning for another adventure in Psychonauts 2, the psychic cadets are growing in their abilities and able to command new powers, which players can use to pulverize the villainous censors and bad ideas. Join us as we give you an exclusive first look at Psychonauts 2’s latest ability: mental connection.

Psychonauts 2 picks up three days after the events of the original title with Raz joining the Psychonauts to learn from the world’s best psychic minds. Already late to class, our hero bumps heads with Hollis Forsythe, second in command at the Psychonauts, as she teaches her class in the ways of mental connection. According to Hollis, the ability allows users to link certain thoughts together to form associations. But there are always consequences to messing with people’s minds.

When Hollis steps away, the kids start to play. We won’t spoil anything for you, but when Raz goes wild connecting ideas in Ms. Forsythe’s mind, the newest member of the Psychonauts must work to reverse his mistake before the storied organization goes completely kaput.

The mental connection ability isn’t only used for major story beats though. Raz’s power also acts as a means of traversal and is useful in combat. In this scene, Raz uses his special combination of acrobatics and psychic abilities to pull himself into a thought bubble. From there, he’s not only able to connect bubbles and form new thoughts, but he can use mental connection to traverse the level and gain access to more vertical locations. This method of traversal opens up a whole new world of platforming possibilities for our psychic cadet as Double Fine challenges players with even more perilous play spaces.

Mental connection also enhances the combat experience, and the new ability works differently when used against various opponents. When faced with a smaller enemy type such as the original Censors or the new Bad Ideas, Raz will pull them closer to unleash a flurry of furious blows until the enemies cease to exist in a person’s mind. But what about when the Heavy Censors come rolling in? Raz can use his newfound power to pull himself toward the big baddies then devastate them with his other psychic abilities before they can even think about stamping out another spark of creativity.

Mental connection is just one of the new abilities fans can look forward to using in Psychonauts 2, but what else does developer Double Fine have up its sleeve? You’ll just have to tune back into Game Informer to find out.

If you enjoyed this video, be sure to keep check out the coverage hub below and the reveal of our latest cover story!

Editor’s Note: Hello! Unfortunately, we made an error in the voiceover as it pertains to one of the character’s names. The correct name is Lili Zanotto and we apologize for the mistake. The video has been updated to reflect the correct name.