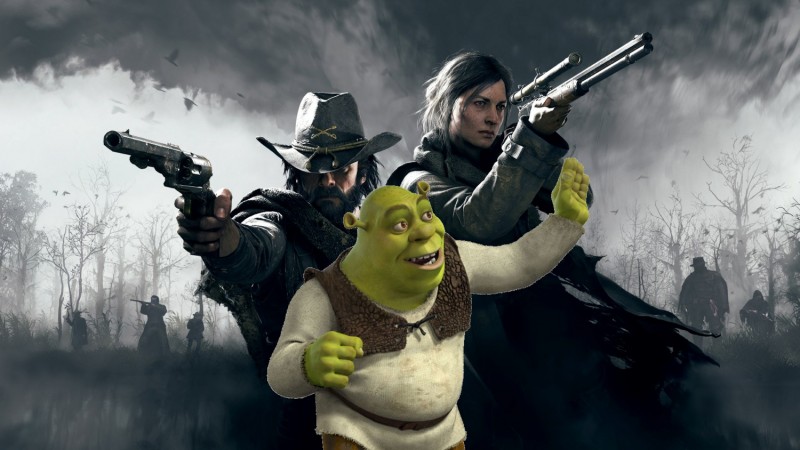 Shrek has found a way to invade the world of Hunt: Showdown. While the green man himself is suspiciously missing, his home in the swamps can be seen with new DLC that has dropped for the first-person shooter. For once, the Shrek universe isn’t colliding with a game due to mods, but if this inclusion feels random – it really shouldn’t. Hunt: Showdown has all sorts of mythical entities, and Shrek’s home has witnessed more than a few fairy tales.

Hunt: Showdown is set in the late 180ss and tasks players with taking out various monsters they will encounter in their journey. With a setting rooted in the Louisana Bayou, the inclusion of Shrek’s swamp and his house isn’t as weird as it sounds, but does this mean Shrek will eventually become a bounty? Doubtful, but the mind reels just thinking of the possibilities.

With the Beast Hunter DLC adding the new DeSalle map, YouTuber @JackFrags was quick to spot the latest update, saying: “They added Shrek’s house to a video game as a cool Easter Egg!” He added a clip of his find, which you can see below:

While not an exact replica, it is hard to deny that this is Shrek’s home, especially when you notice his toilet on the left. No Donkey, though, so the game still has a few flaws.

If you’re interested in learning more about the DeSalle addition, check out the video at the top of the article to see what it brings to the Hunt: Showdown experience. DeSalle is the first map to be added in about three years, but the new DLC also includes 16 new compounds with new environments that players can explore and conquer.

The real question is simple: When will Shrek appear as a character in Showdown?

Thoughts on the latest DLC for Hunt: Showdown and the nifty little Shrek Easter egg? Sound off with your thoughts in the comment section below!

END_OF_DOCUMENT_TOKEN_TO_BE_REPLACED

Pokémon Scarlet And Violet Review – The Struggles Of Evolution

The AirPods & AirPods Pro Are at Their Lowest Prices Ever

Apple Apple’s wireless earbuds are incredibly popular, even as there are hundreds

POR666 / Shutterstock If your dog barked at the moon the other

Upgrade Your PC With a 1TB SSD for Just $68 Today

Solid state drives have become cheaper and better over the past decade,