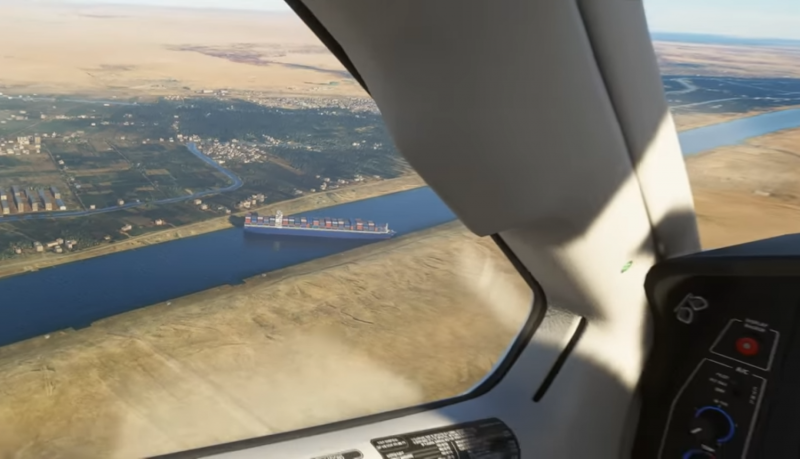 The Suez Canal cargo ship that has gotten stuck has been an incredibly trying time regarding what that means for halted trade and economic process, but that hasn’t stopped the memes from rolling in and doing what they do best: make us laugh to keep from crying. While the cargo ship in real life is experiencing freedom (at last), Microsoft Flight Simulator continues to push realism to its limit by making it stuck in-game as well. At least, this mod does.

The Ever Given has been stuck in the Suez Canal, effectively blocking world trade during this duration, for a few days now but efforts have finally yielded success when it comes to getting it back out on open water. After being “successfully refloated” today, the memes are coming to a close but Microsoft Flight Simulator is keeping the memory alive:

The ship is even stuck on Microsoft flight sim pic.twitter.com/bp3lWKw4WY

The above clip was shared by Twitter user @MattRickard and it turns out that this is actually a mod, not an official update (that we know of). The above clip is actually from YouTuber Donut_Enforcement and he shared a fuller version of the above video below:

The mod itself can be found here and the creator explains that this is simply an insertion of the cargo ship and that it’s not an actual visual representation of what happened. For those looking for a more authentic experience, he goes on to share another add-on that simulates the traffic jam that occurred following the blockade, which can be found here.

Regarding how the massive cargo ship became stuck, that is still under investigation, though the Suez Canal Authority stated that the ship lost control during a high-wind dust storm, but the impact – memes aside – of this predicament has been immense. With headway made earlier today in feeding the ship, this is good news, but the ship isn’t in the all-clear yet. Lt. Gen. Ossama Rabei, head of the Suez Canal Authority announced, “The Suez Canal will not spare any efforts to ensure the restoration of navigation and to serve the movement of global trade.”

Luckily, all of the crew aboard this vessel is safe and accounted for.

2021-03-29
Previous Post: Monster Hunter Rise Bug Could Lock Your Save File, Here’s What You Can Do
Next Post: Star Wars: Obi-Wan Kenobi Cast Announced, Vader Returns