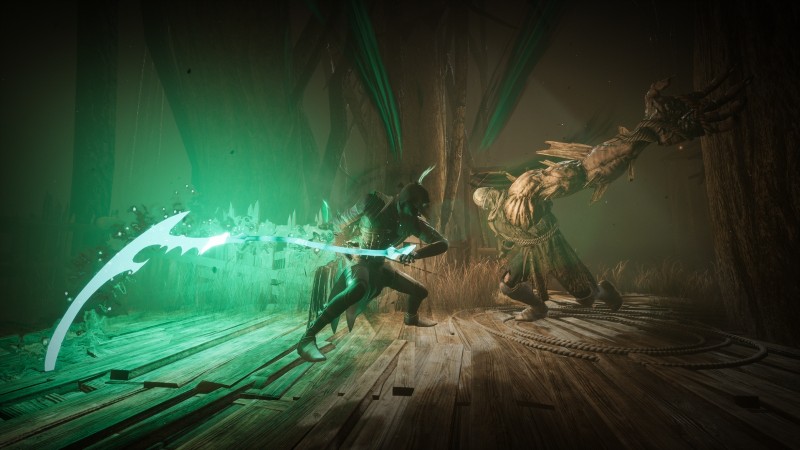 Thymesia is a newly announced action game by OverBorder Studio and Team17 that puts players in the role of a plague doctor who can turn diseases into physical weapons. That intriguing premise is certainly one way to turn some heads, and the game’s debut trailer transforms that curiosity into attention by highlighting its action-packed combat.

Players control Corvus, a plague doctor who can not only clash blades with the best of them, but who can also seize diseases from from infected enemies and use them offensively. An example is shown in the debut trailer where Corvus transforms illnesses into Green Lantern-esque constructs of weapons like scythes, spears, and swords. Corvus’ stats can be customized in a way to create different builds for players to mold the butt-kicking plague doctor of their preference.

As you see in the trailer, Thymesia is an action game through and through. Combat is fast-paced with an emphasis on tearing the mutated, tough-as-nails enemies to shreds with rapid strikes while dashing and parrying to defend yourself. The quick tempo looks appealing (as someone who enjoys a good stylish action game), and I’m curious to learn more about how the other ways diseases function in combat.

Thymesia takes place in a plague-ridden dark fantasy world, However, we don’t know story specifics yet other than you’re trying to regain Corvus’ memories. What we do know is that the game will feature different endings to encourage multiple playthroughs. Exploration looks reminiscent of Dark Souls, with a gloomy atmosphere and medieval trappings.

If you think Thymesia looks up your alley, you’ll want to keep an eye out for a release date; right now, the information there is that it’s coming sometime this year. It’ll be available to purchase on PC, with no word on a console release as of yet. What do you think of Thymesia’s creative approach to the action genre? Let us know in the comments!

2021-03-25
Previous Post: What You Need To Know About Deathloop’s Story
Next Post: The Lord of the Rings: Gollum Preview – Escape From Barad Dur